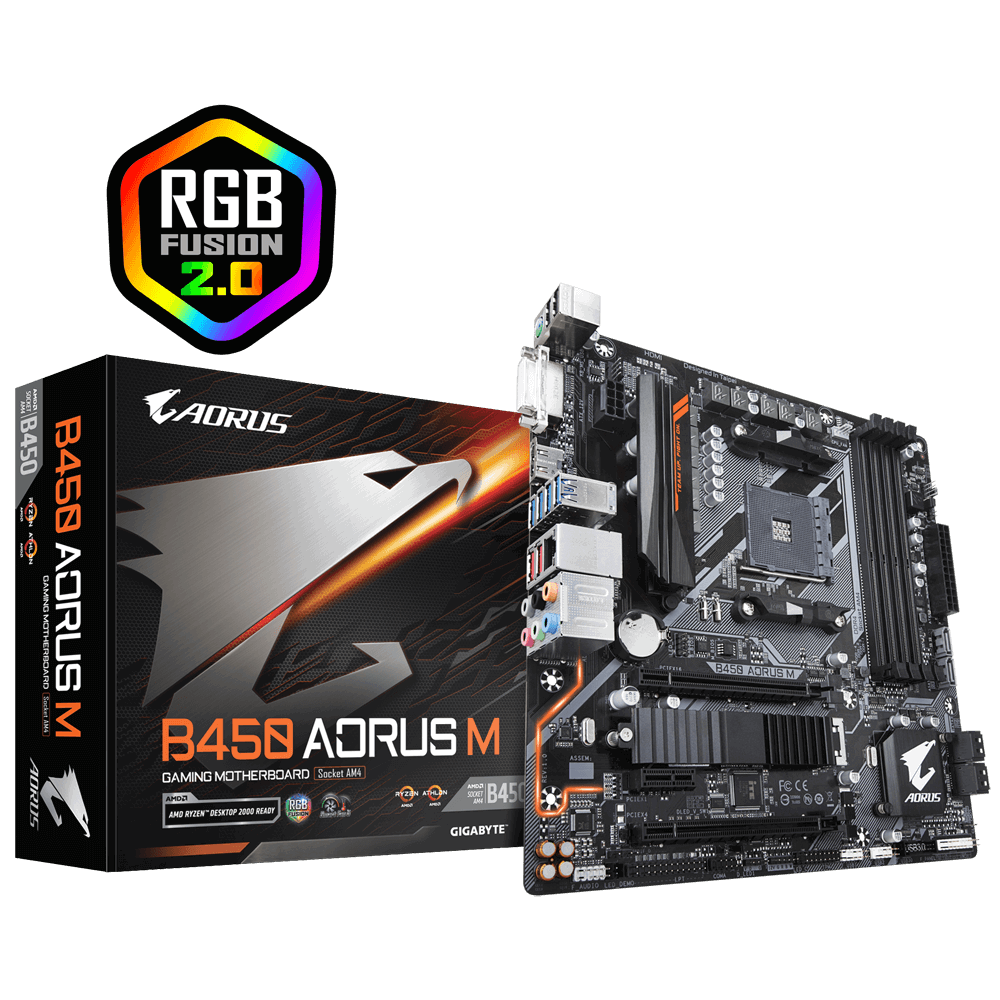 The B450 chipset forms the centrepiece of the Gigabyte B450 Aorus M motherboard and has been specially developed and optimised for 2000- series (Pinnacle Ridge) Ryzen CPUs. B450 motherboards support all features of 2nd gen Ryzen processors, such as the AMD’s new XFR2 overclocking. Additionally, the motherboards support up to 64 GB of RAM with a guaranteed clock frequency of 2.667 Megahertz. Overclocking to higher frequencies is also an option, although the increase will depend on the motherboard.

THE FEATURES OF THE GIGABYTE B450 AORUS M AT A GLANCE:

THE FEATURES OF THE GIGABYTE B450 AORUS M IN DETAIL:

The Gigabyte B450 Aorus M Micro-ATX motherboard comes with a PCI-Express 3.0 slot with a full x16 Anbindungfor graphics cards as well as a PCI-Express 2.0 x16 slot with x4 connectivity. For additional expansion cards the motherboard offers a PCIe 2.0 x1 slot. The four RAM-slots support up to 64 GB DDR4-RAM clocked at up to 2.667 MHz and can even be increased to up to 3.200 MHz via overclocking.

An M.2 slot with PCIe connectivity is provided thanks to this board being AM4-based. M.2 SSDs that use the advanced NVM-Express protocol (NVMe) and that are connected via PCI-Express 3.0 lanes are up to eight times as fast as SATA 6G hard drives and support data transfer rates of up to 32 Gbit/s. The slot has an integrated heatspreader and accepts M.2 drives up to 110 mm (22110).

The Gigabyte B450 Aorus M comes with two USB 3.1 Type A ports and four USB 3.0-ports. Additionally there are also two USB 2.0 ports. For CPUs with integrated graphics like AMD’s Raven Ridge, an HDMI- as well as a DVI-D port are provided.

The motherboard comes with several headers for static RGB elements and a 4-pin header for select boxed AMD coolers. Furthermore there is also a 5-pin connection for static RGB elements and two digitally addressable 3-pin slots, and their power supply is delibered courtesy of either a 5V or 12V line depending on the jumper setting. RGB components connected to this can be controlled like regular lighting via Gigabyte’s RGB Fusion software, like the RGB-LED lighting on the motherboard itself. Additionally, there are three 4-pin PWM connections for fansavailable.