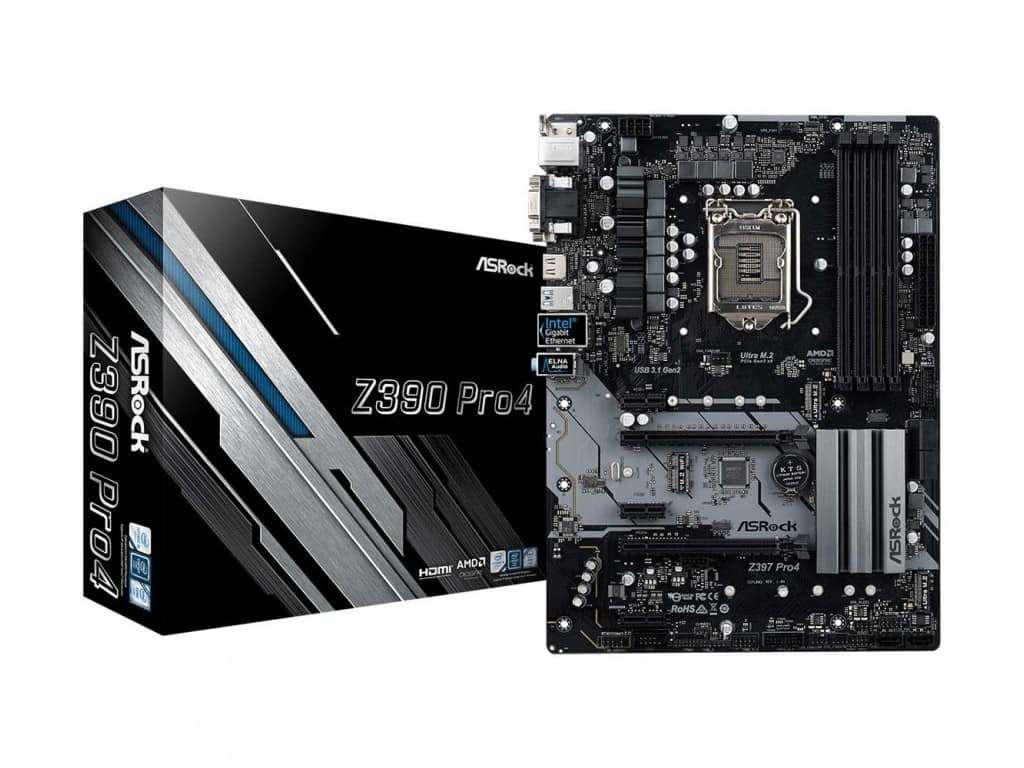 The Features of the ASRock Z390 Pro4 Motherboards at a Glance:

The ASRock Z390 Pro4 in Detail

The ASRock Z390 Pro4 motherboard (ATX) offers a total of two PCIe x16 slots, one of which is connected to the chipset via a full 16 lanes, the other uses four. For additional upgrades and expansion cards the motherboard has three PCIe x1 slots. Furthermore the motherboard supports multiple graphics cards via AMD CrossFire and NVIDIA SLI.

The four DIMM slots support up to 64 GB of DDR4 memory operating in Dual-Channel Mode. The Z390 chipset natively supports frequencies up to 2.666 MHz, and with overclocking, the ASRock Z390 Pro4 is capable of driving RAM kits at up to 4.300 MHz. For hard drives and SSDs, the board offers six SATA 6G connectors and two M.2 slots. Both M.2 slots are connected via four PCIe lanes to the chipset and support the NVMe protocol which enables data transfer rates of nearly 4 GB/s. This makes M.2 PCIe SSDs up to eight times faster than SATA 6G SSDs!

The I/O panel of the ASRock Z390 Pro4 provides one USB 3.1 Type C connector. This new kind of USB Type C port is particularly slim and connectors can be plugged in either way. USB 3.1 or USB 3.1 Gen 2 can achieve speeds of up to 10 Gbit/s per port and USB ports with this standard generally support the fast charging function on smartphones and tablets. Furthermore, the I/O panel offers two USB 3.0- and two USB 2.0 ports as well as D-Dub-, DVI-D- and a HDMI connector. Internally the motherboard provides a generous selection of connectors and headers.

In terms of the special features of the ASRock Z390M Pro4, it offers multiple connectors for fans – something that is often missing in compact form factors. Four 4-pin headers are spread across the board, and these can be controlled by automatic fan control. Three connectors are available for water cooling. Multiple temperature sensors help ensure that optimum fan control is maintained.